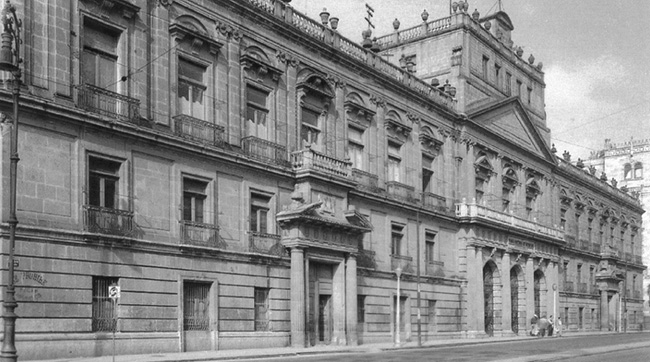 The School of Engineering of the National Autonomous University of Mexico (UNAM) turns 225 years old, being the first engineering school founded in America. Its origin goes back to the Real Seminar of Mining, institution in charge of the scientific training of young people dedicated to the exploitation of mines. Since then, our institution has been dedicated to the preparation of professionals who have contributed to the transformation of our country. Below are the most relevant milestones of this prestigious school.

Pope Clement XIV dissolves the order of the Jesuits.

Joaquín Velázquez de León and Juan Lucas de Lassaga made the new ordinances, representing the mining guild of New Spain. It is the precursor of the Court of Mines and the basis for the ordinances of Mining of 1784.

Independence of the United States.

The Spanish King Charles III approves the creation of the Mining Corps in New Spain.

The shield of the Royal Mining Court is created.

REAL SEMINAR OF MINING: The Real Seminar of Mining starts activities in its first headquarters, the San Nicolás Tolentino Hospice, now Guatemala Street # 90. The first scientific, technical, secular and outside the Royal University institution was born here, unique in its type in the American continent.

The Nipaltongo Manor is purchased from the Royal Academy of the Three Noble Arts of San Carlos of New Spain, for the construction of a "Metallic School" (Calle Tacuba).

On March 22, Manuel Tolsá is appointed director for the construction of the second site of the Royal Seminar of Mining. The teaching of modern chemistry and higher mathematics in Mexico begins.

Andrés Manuel del Rio, founder of the Cathedra of Mineralogy, discovers the Vanadium.

Alexander von Humboldt travels through New Spain supported by professors and students of the Royal Seminar of Mining.

The War of Independence begins.

The Royal Seminary of Mining moves to the street of San Andrés (today Tacuba) even when the building was not completed.

At the triumph of the Independence, the Seminar becomes the National College of Mining.

Antonio Villar Olea performs the intervention of almost the entire structure of the building for almost 30 years.

The Educational Reforms promoted by Valentín Gómez Farías changed the name of the College to Third Establishment of Major Studies.

The Educational Reforms of Gómez Farías are abolished and the College returns to be "Seminar of Mining".

It is established in the Constitution that Mexico is a Federal Republic.

Spain recognizes the Independence of Mexico.

The Mining Development Board promotes the first geological expeditions.

Inauguration of the first line of the telegraph in Mexico.

Piped water is introduced for the first time through the Aqueduct of San Cosme.

The Mines Practical School is founded in Fresnillo, Zacatecas.

The railroad from Mexico City to Villa of Guadalupe is inaugurated.

The Reform War between Liberals and Conservatives starts.

. Laws of Reform. Charles Darwin publishes The Origin of Species.

During the Empire of Maximilian of Habsburg, the Imperial School of Mines is established.

Shooting of Maximilian of Habsburg.

After Benito Juárez Promulgated the Organic Law on Public Instruction of Education, the School becomes the National School of Engineers. Civil Engineering, Mining and Geography courses are created.

The railroad from Mexico to Veracruz is inaugurated.

Porfirio Díaz assumes the Presidency of Mexico for the first time.

The Ministry of Development is established on the east side of the Palace of Mining.

The Secretariat of Public Works is founded. Manuel Fernández Leal becomes the first engineer to hold a public office as Minister.

One of the largest collections in the world of iron meteorites from Chihuahua and Zacatecas is brought and exhibited in the lobby of the Palace of Mining.

The teaching of civil engineering reaches modernity with the opening of the laboratory of building materials.

The first network of electric trams is inaugurated. The first radio message is broadcast in Mexico.

The first laboratory for teaching Industrial Mechanics and Electricity of the country is established in the current Bicentennial Hall.

The House of Representatives is installed temporarily in the Hall of Acts of the Palace of Mining.

On September 22, during the celebration of the Centennial of Independence, Porfirio Díaz founded the National University of Mexico

This year, Diaz also pays his last protest as president in the Hall of Acts of the Palace of Mining.

The new Mexican Constitution is promulgated.

The career of Mechanical and Electrical Engineering is created.

Secretary of Education, José Vasconcelos, organizes the "First Book and Graphic Arts Fair" in the Palace of Mining.

Creation of the career of Petroleum and Geological Engineering.

The University’s Autonomy is achieved, it becomes the National Autonomous University of Mexico.

It changes the name to National School of Engineering.

Pascual Ortiz Rubio is the first engineer to be president of the Mexican Republic.

The School of Physical-Mathematical Sciences is created constituted by the National School of Engineering and the Faculty of Sciences in the Palace of Mining.

The Faculty of Sciences of the UNAM is founded in the Palace of Mining, later also the Institutes of Physics and Mathematics will open their doors.

The Laboratory of Experimental Engineering is created within the Irrigation Commission. The Tecamachalco dam is built.

The Federal Commission of Electricity (CFE) is created.

Inauguration of the Central Airport of Mexico City.

The disciplines of Soil Mechanics and later Geotechnics are developed.

The drinking water system is established; the engineer Eduardo Molina was in charge of the work.

The first ENIAC computer is created. The first Pemex refinery is built in Salamanca. The Instituto Mexicano del Petróleo creates a body of engineers and specialists from the international oil industry, this was promoted by the engineer Javier Barros Sierra.

The first ENIAC computer is created.

Inauguration of the first circuit of Ciudad Universitaria or University Campus.

The transfer of the National School of Engineering to its new headquarters in the university campus begins.

The Institute of Engineering is created as a civil association. In 1959 it joined UNAM as part of the Research Division of the Faculty of Engineering.

The Institute of Engineering makes theoretical and experimental investigations that give rise to centers of research and seismic monitoring and of prevention of disasters.

Creation of the Division of Higher Studies, precursor of the Secretariat of Graduate Studies and Research in which three degrees of Master in Engineering are awarded: Structures, Soil Mechanics and Hydraulics.

The UNAM opens the first Electronic Center in the Faculty of Sciences.

Triumph of the Cuban Revolution.

The National School of Engineering is elevated to the rank of Faculty.

The Society of Alumni of the Faculty of Engineering (SEFI) is created.

Construction of the Metro (subway) starts. The leader of the project of the first three lines is engineer Bernardo Quintana.

The university reform, led by the rector Javier Barros Sierra, reorganized the curricula in engineering and basic courses in mathematics and physics. This gives rise to the Department of Propaedeutic Subjects that resulted in the new Division of Basic Sciences.

Student Movement in Tlatelolco. The Olympics Games were realized.

Arrival of man to the moon.

Inauguration of the Metro Transportation System.

Creation of the courses of Geophysical, Mechanical, Industrial and Electrical-Electronics Engineering.

Creation of the degree in Computer Engineering.

On March 22, Manuel Tolsá is appointed director for the construction of the second site of the Royal Seminar of Mining. The teaching of modern chemistry and higher mathematics in Mexico begins.Creation of the Mining Academy of the Palace of Mining and its Symphonic Orchestra.

Execution of the first International Book Fair of the Palace of Mining.

War between Iran and Iraq.

The Center for Continuing Education rises to the category of Division.

Launching of the satellites Morelos I and II.

Earthquake of 8.1 degrees shakes the center of the country.

Creation of the Engineering Degree in Telecommunications.

Terrorist attack to the New York twin towers in the United States.

Creation of the Mechatronics Engineering career.

Creation of the Geomatics Engineering career.

The library where the former Laboratory of Resistance of Materials of the National School of Engineers was, is named "Ing. Antonio M. Anza".

The UNAM Central Campus is declared a World Heritage Site by UNESCO.

Celebrations for the Bicentennial of Independence.

Celebrations are held to commemorate the bicentennial of the conclusion of the Palace of Mining.

Creation of the Engineering Degree in Biomedical Systems.